Deepings Heritage wishes all our readers a  Very Happy Christmas.

Here is just a little reminder of the Market Place in snowy times.

It was blowing a gale there yesterday! 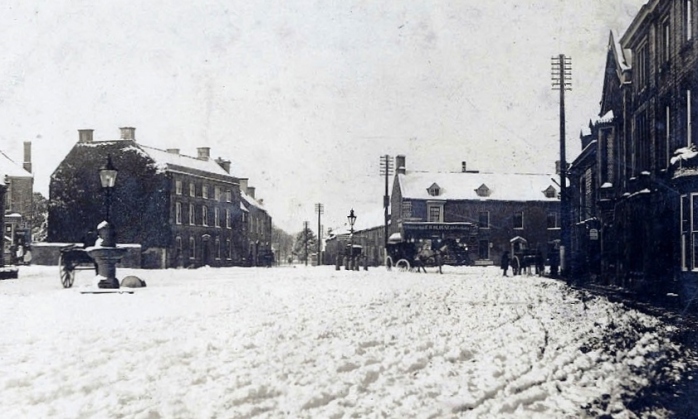 We are really looking forward to hearing

speak at our next meeting on Thursday December 10th:

When Judith first looked inside the  Parish Chest in  St Mary’s Church, Pinchbeck in 1974,

“opening the lid was like opening Pandora’s Box; nothing ever was the same again. In that moment I glimpsed a world that had been hidden away for over 400 years and I was ensnared….. The 16th and 17th Centuries were momentous times yet relatively little is known of a fenland village such as Pinchbeck.”

In her book, published in 2012, she wanted to “paint a picture as accurately as I can of a fen village, the land, the people and how they lived” between 1560 and 1660 and she reveals how they contended with the trials and tribulations of their times.

She gives a real understanding of this fascinating period in the history of a village only 15  miles away from our own fenland edge settlements: many of their challenges would have been our challenges.

Deeping Fen extended towards Pinchbeck and the “Survey of the Manor of East and West Deeping”, written in November 1649 commented “There is a large and spacious common fen or marsh which by reason some part thereof was overflown by waters…..we guess it to contain 10,000 acres…..not only the inhabitants of the towns of West Deeping, Market Deeping, James Deeping and also the inhabitants of the town of Uffington, Tallington, Barholm, Stow and one house in Greatford, take common for all manner of cattle without stint….”

Judith’s book dispels some of the old myths of “brutish, uncivilised tempers” portrayed in Camden’s 17th century “Brittania” and of a water-logged wilderness.

As Dr Francis Pryor commented, she brings 16th and 17th Century Pinchbeck to life “as if it were yesterday.”

And we will also certainly discover what gowts and galligaskins really were!