The following delightful photographs of two Green School classes in 1928 offer a fascinating glimpse of just 42 pupils amongst the generations of Market Deeping children who passed through the school door.

It was founded in 1851 as a school for “poor girls of the parish”  to instruct them “in the principles of the Established Church” and to teach them “reading and plain needlework”.  Reverend William Hildyard (1794-1875)  was the inspiration and gave the land,  Mary Wensor (1797-1849) and Elizabeth Molecey (1762-1846) provided the money to build and to run the school.

1928 was the only year when the senior girls were wearing these stylish school hats – was this the first attempt to have some elements of uniform? A number of the girls are wearing the traditional square-yoked pinafore dresses while some have the boots still worn by a lot of children.

We know that these girls would leave school at 14 with a “good store of information from their reading in History and Geography” but we hope that they managed to gain a “better understanding of prose and verse”! They could write “compositions of a good length” and clear, but neater writing and more accurate spelling was still “desirable”. (The school had been inspected in 1927and this is part of the report). Three of their class had already won a free scholarship to Stamford Girls School.

Miss Smith from Deeping St James had been appointed in 1923 to lead the school at a salary of £171. 13s. 7d. She served the school for 19 years – even after she married in 1934 – it was still the time when most female teachers were asked to resign after their marriage.

The mixed infant class (5-7 year olds) with their teacher, Miss Pick, who had just been appointed to the school. 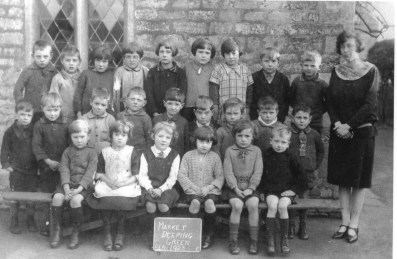 This class seems to have been dominated by boys, 15 out of 24 pupils. One little girl on the back row carried the lifelong memory of there being lots of boys! No real smiles either, some look quite worried.

No uniforms here – life was often a real struggle for many families at this time.

This photograph also reflects the fact that in 1874 the original school building was extended to its present size to include infant boys and all elementary girls as the Boys Endowed School down the road in Church Street (opposite the Vine) could no longer cope with the numbers.

Memories of these girls and boys have been collected over the years. Here are some…..learning the alphabet by singing, doing drill and marching (PE), singing, the daily visit of the Rector, nature walks in the Church fields opposite  looking for cuckoo flowers, cowslips and stickwort. They were able to play with their whips and tops in the road as there was hardly any traffic then and in winter they could slide in the playground when the teachers threw down water to freeze! They looked forward to the annual Sunday School sports and tea on the Rectory lawn but they dreaded the dentist visiting when his van parked in the school yard with one little girl refusing to open her mouth – much to the dismay of her parents as this was a new, free but possibly painful service! It was a different world then……

By 1942 the Green School merged with the boys Endowed School to become the Endowed and Green School. The doors were finally closed as a school in 1967 when the new William Hildyard School was opened.

If you recognise any of these pupils or indeed have any memories or photographs of the Green School, please do contact us.

We have a good collection of photographs and documents but we would love to add to them.

At our meeting on 9th March, we welcome back aviation enthusiast Alastair Goodrum, who gave a fascinating talk about balloons and early flying machines in November 2014.  This month his topic is the air defence of eastern England by night fighter squadrons, operating from RAF Wittering and Digby.

The talk will be based on his book which describes night fighting as “a devious and clandestine form of combat, by men whose moral standards on the ground were above reproach, but when fighting in the night sky, gave no quarter”.

He will describe how a corridor from the Wash to Birmingham became a battle ground in two world wars, and give insights into the experiences of pilots and gunners on both sides of the conflict.

The meeting starts at 7.30pm in the Conference Centre, Deepings School.  Everyone is welcome.  There is a charge of £2 for non-members.

One hundred years ago this month, a Deeping St Nicholas airman lost his life to perhaps the most notorious German fighter pilot, Manfred von Richthofen, known as the Red Baron.  Frederick King, whose parents lived near The Blue Bell pub, was a farm labourer when he joined the Lincolnshire Regiment in 1915.  He was promoted through the ranks as a soldier and on 9th February 1917 transferred to the Royal Flying Corps and trained as an observer.

On the morning of 17th March 1917, he was in an aircraft piloted by Arthur Elsdale Boultbee, a clergyman’s son, flying over France on a photo-reconnaissance mission.  Arthur was aged 19 and Frederick was 22.  They were killed when the Red Baron machine gunned their plane with around 800 shots.  Both men are buried in Canadian Cemetery No. 2 near Arras.  Arthur Boultbee’s mother was Canadian, and his elder brother had already died serving in the Canadian Infantry.  Frederick King is remembered on the Deeping St Nicholas War Memorial.