Stamford racecourse – which will be the subject of Penny Rowley’s talk at our meeting on 9th November – attracted large crowds in the mid 19th century.  People arrived by train from around the country, including aristocracy from London.  They patronised the inns and brought trade to the town.

In 1866 a group of Deeping businessmen hoped to improve the prosperity of their own community, by organising local horse races.  Formerly a busy hub of stage coach traffic, Market Deeping had become a backwater since railway travel took over, with the nearest station almost four miles away.  There were descriptions (perhaps slightly exaggerated) of grass growing in the streets and elderly shop-keepers dreaming of the days when customers used to arrive.

Racing took place about a mile out of town in a field loaned by Edward Johnson, a farmer at Maxey.  John Markwell, proprietor of the New Inn, who had experience as a Starter at Newmarket and other racecourses, was in charge and the local doctor, chemist, miller, brewer and solicitor acted as Stewards.  There were six races on the card, including one over hurdles.  No professionals were allowed to ride.

On the day of the Races, 24th July, church bells were rung, many houses put out flags and banners and musicians paraded the streets.  Booths were erected round the course, offering tea, cold meat and cigars.  In the evening there was entertainment in a field near the town bridge, with dancing to Maxey brass band and a spectacular firework display.

Although race goers were mainly composed of families of local farmers and tradesmen, the event was considered a great success.  It was repeated the following year, and in 1869 it was expanded to include “Velocipede Races with Rural Sports and Diversions”.  Bicycle races took place through the town in the evening.   The race meeting in 1870 was delayed due to an early harvest, but in 1871 all went well.  The Sportsman newspaper reported that “From an early hour, the little town showed evidence of extraordinary gaiety …..  to welcome the incessant stream of visitors which thronged into the town.”

However, the Race Committee was feeling the effect of “much arduous exertion and personal expense”, and Mr Markwell, whose expertise was essential to success of the Races, was almost seventy years of age.  After six consecutive years, Market Deeping Races ended, and local businessmen concentrated their efforts on trying to establish an railway branch line to the town. 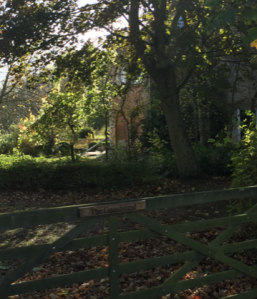 Stamford Races also ended in the 1870s, when the Marquis of Exeter withdrew permission for the use of his land.  The only remaining evidence is the name Racecourse Road at Easton-on-the-Hill where part of the old grandstand, now converted to a private house is visible through trees.

Penny Rowley’s talk is titled “The History of Horse Racing and Stamford Race Course” and she will give an entertaining account of events both on and off the field.  Our meeting starts at 7.30pm in the Conference Centre, Deepings School.  Everyone is welcome.  There is a charge of £2 for non-members.