Sea-going vessels have brought new people and goods to these islands for thousands of years, influencing the local culture.  At our meeting on Thursday, 8th February, Chris Carr will describe how the Roman invasion affected our food and cooking.  There will be a chance to taste some Roman-style cake! 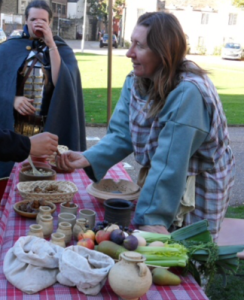 Chris is a freelance history teacher, with a particular interest in the cultural interaction between Rome and the indigenous population of Britain, prior to the building of Hadrian’s Wall.

She is pictured here offering Roman refreshments at a re-enactment event.

By the 12th century, Boston had become one of the main ports of England, importing wine and spices, among other high value goods, but by 1500 it was reduced to being a local port, handling trade for Lincolnshire .  Port Books, recording shipments in and out of Boston between 1601 and 1640, show that the main import was timber from Norway, but  large quantities of salt, sugar, wine, vinegar and dried fruit also arrived. The salt was shipped from Scotland, together with cod, coley, herrings and oatmeal.  Dutch ships brought in sugar – mostly white, but also muscovado, molasses and treacle, French wine from the Bordeaux region and Spanish sack (a type of Sherry), vinegar, raisins, prunes, currants & figs.   Imported spices included aniseed, cinnamon, cloves, ginger and nutmegs.  These goods would be available in the county’s shops – though perhaps only affordable to more prosperous inhabitants.

Grocery shops are recorded in the Deepings in the 16th and 17th centuries, but  there is no indication of what they stocked.  However, in 1701 when William Bowman died, the contents of his shop and warehouse at Market Deeping and shop at Glinton were itemised.  As a chandler, he processed tallow to make candles and sold everything from flax to soap, horse collars, writing paper, gunpowder, drinking vessels, haberdashery and much more.  His food stocks mirror quite closely the range of goods landed at Boston.  He sold currants, “raisins in the sun”, Malaga raisins plus other varieties, sugar, treacle and honey, salt fish, salad oil, brandy and Spanish wine.  His spices included white ginger, black and white pepper and pimento, salt and aniseed water.  He also had a large amount of tobacco.

Goods shipped out of Lincolnshire, in the largest quantities, between 1601 and 1640 were hempseed, horsehair, goose wings and quills, and animal skins – either in their natural state or as leather.  Among other items exported were mustard seed, linseed, ox horns and glue.

Chris Carr’s talk starts at 7.30pm in the Conference Centre, Deepings School.   Everyone is welcome.  There is a charge of £2 for non-members.