You are warmly invited to a free exhibition, featuring some of the fascinating people who have walked along our streets over the centuries.  The event takes place on Saturday, 23rd June between 1pm and 4pm in the Oddfellows’ Hall (next to Tonino’s) in Church Street, Market Deeping.  A wide range of archives will be available to look through, including the 1939 Register of Deepings residents, old maps, scrap books and photographs not exhibited before.  Everyone should find something to interest them!

If you were living in Deeping in the late 1880s, three of these faces would be very familiar.  Second from the left, aged about 27, is Dr Henry Thomas Benson, the local GP.  Next is George Linnell, chemist and dentist, with Walter Marston of the brewery family, on the far right.  George Lee, the elderly man on the far left was less well-known.  He had moved to Market Deeping after retiring as House Steward of Milton Hall near Peterborough.  His daughter, Edith, was married to George Marston.   On the evening of 5th November, 1888, George Lee was at home playing whist with his wife, daughter and son-in-law, when he collapsed “with awful suddenness”.  Mr Marston ran for Dr Benson who lived only a few doors away and arrived in two or three minutes, but was unable to revive Mr Lee who died aged 63.  This sad event enables the photograph to be dated between 1886 when Dr Benson became Medical Officer of Deeping District, and November 1888.

Henry Benson was a doctor here for 34 years, most of that time in partnership with Dr William Edwin Stanton. He had one of the first telephone lines in Market Deeping – number 3.  Even after his retirement in 1924, Dr Benson was active in local affairs, being a member of the Deeping Water Board and the Gas Company.  He died in Worthing in 1942, aged 83.

George Linnell was in his early seventies when the photograph was taken.  He began his business of chemist and druggist in the Market Place about 1838 and retired from his shop near The Bull in 1890.  Believed to be descended from Sir Thomas Linnell who fought against Richard III at the Battle of Bosworth, George died in 1904 and is buried in St Guthlac’s churchyard.

Walter Marston was born in Market Deeping, son of brewery owner John Taylor Marston whose premises were next door to The Bull.  Walter competed in athletics and shooting tournaments  in his youth, and was in his late thirties in the picture. He moved permanently to Dorset in 1893 with his family and widowed mother-in-law, Mary Lee. He was a director of the Dolphin Brewery in Poole for 46 years, on the Town Council and the Workhouse Board of Guardians there.  He died in Poole in 1915, aged 64.

At our meeting on 8th November this year, we shall be welcoming back another well-known local personality, architectural historian  Dr Jonathan Foyle, who was educated at The Deepings School.  He is the author of five books about historic buildings and presented the BBC TV series “Climbing Great Buildings” and “Henry VIII: Patron or Plunderer?” 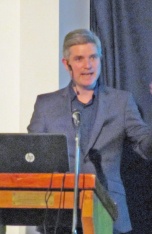 Jonathan’s talk will be titled “Peterborough Cathedral – a Glimpse of Heaven”, to coincide with the building’s 900th anniversary.  This special event starts at 7.30pm in the Main Hall of Deepings School.  Tickets costing £3 for members (£6 for non-members) will be available at our Exhibition on 23rd June.  They can also be obtained from Geoff Whittle (01778 343390), or by emailing deepingsheritage@hotmail.com.

This hand-coloured photograph of the bridge over the river Welland between Deeping St James and Deeping Gate pre-dates 1899.

The tall red brick building has a sign reading “Shillaker” and was a drapers & grocery shop run by John Shillaker and his family, until the premises were sold in April 1899 to the Chesterfield family.   Mr Shillaker then moved his business from the Bridge Foot to Church Street, Deeping St James.   The building on the far left is The Bell public house.  Beyond the trees, the tall chimneys belonged to Waterton Hall.

The picture has been carefully posed with a boatman framed by the centre arch of the bridge.  This could well be William Robinson, water bailiff and fisherman who lived in Bridge Street.  Mr Robinson was born in the village in 1864 and involved with the river all his working life.  He and his wife Betsy had twelve surviving children by 1911.

At the time of the photograph in the 1890s, it is likely that no motor vehicle had ever been driven over the bridge. The very first car to pass through the Deepings came in 1897.  In 1908, the local vicar, Samuel Skene expressed the opinion that “the motor car has made great strides lately, but it will never take the place of a good horse.”

In 1937 “The Lincolnshire Magazine” included an article written by Cecil R Burchnall, who lived in Bridge Street, near the Bell Inn, and was at that time an assistant schoolmaster.  Describing the river, he said “The oldest inhabitants speak of the days of the barge, before it was ousted by the railway.  Barges carried 20 tons and were generally in convoys of five, drawn by two horses.  One time-worn oak post stands precariously by a cut water in the bridge, as a link with the barges of yester year.”

A register of inhabitants taken in 1939, shows that Letitia and Hilda Chesterfield were still running a drapery business in the Bridge Foot premises.   William Robinson, aged 75, had retired from his role as river bailiff, but also remained in Bridge Street with his wife Betsy.

In this recent photograph, the Bell Inn and former drapers shop (now a private house) have light-coloured exteriors.  Waterton Hall and its tree-lined grounds have been replaced by modern houses and the railings along the riverbank have gone.

It is still a green and peaceful scene, with the arches of the bridge reflected in the water.