From around 1760 when main roads were improved by Turnpike Trusts, the long distance transport of heavy loads became feasible, and stage wagons were the juggernauts of their day. 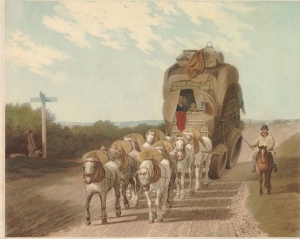 This image of a wagon, published in 1820, shows its huge size.  It was pulled by eight powerful horses, controlled by a man riding alongside who used his voice and a whip to guide them.  In December 1826 it was reported that one carrier at Peterborough conveyed to London 40 tons of geese between a Tuesday and Thursday evening, and that “13 tons of this surprising quantity was sent by one gosherd (goose breeder) at Deeping.”  If each goose weighed, say, 14lbs, 13 tons would equal over 2,000 birds.

Thomas Walter, who lived in Church Street, Market Deeping was proprietor of the Lincoln Stage Wagon in 1803.  It set out from the Horse Shoe Inn, Goswell Street, London every Saturday at noon and arrived at Lincoln the following Wednesday morning.  It left Lincoln again at 1am every Thursday morning, conveying goods to towns along the route.  As Market Deeping was “on the great road from London to Lincoln”, these heavy goods vehicles would have  thundered past his house.  At that time, the bridge over the river Welland was made of wood, and the impact of the hooves of eight horses, plus the weight of the wagon and its load, must have been considerable.

Mr Walter had been a licensed carrier for more than a decade.  In 1793 he was in partnership with John Thomas Vokes who owned a brewery in Deeping, and they operated a wagon “conveying goods between London, Peterborough, Deeping, Stamford and Spalding … performed with fidelity and dispatch”.  When he died in 1810, aged 66, Thomas Walter still owned a new carrier’s large cart body with axle and shafts.  He was also said to have a great knowledge of botany and grew pineapples in a hothouse at his home (now called “The Cedars”).

From the 1840s, the new railway network started to be used for transporting heavy freight and stage wagon trade gradually declined.  At the age of 14 in 1844, Elizabeth Tyler went into service with William Shillaker, a grocer and draper in Church Street, Market Deeping.  In her old age, she recalled how her master “as a buyer of goods, often visited Manchester, and incredulous villagers listening to him when he said he had seen wagons run without horses – yes, seen them with his own eyes!”