On Thursday, 12th December, local wildlife photographer Dave Benjamin will show videos he has taken around Deeping, Maxey and Helpston, as well as further afield in the UK.  In his own words, he “tries to capture the purity of the moment”.  Sometimes it will be dramatic, like otters at play, and at other times more common occurrences like the dawn chorus, with genuine soundtrack of each event.

His presentation starts at 7.30pm in the Conference Centre, Deepings School and should make fascinating viewing, as well as a relaxing escape from chilly December weather.  Everyone is welcome. There is a charge of £3 for non-members. 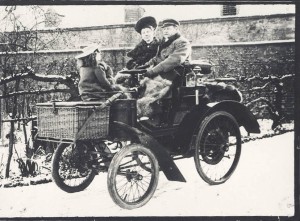 This snowy scene of motoring in Market Deeping dates from about 1902, when a furry blanket was essential to keep passengers warm.  It shows George and Jane Linnell with their daughter Mary who was born in 1894. They lived in the Market Place, where Mr Linnell’s father, George senior, previously kept a chemist’s shop for over fifty years.  The premises are now “the Square” public house.

George Linnell junior was a member of Lincolnshire Automobile Club, which was formed on 4th January 1901 and is recognised as the oldest motor club in Britain.  Fellow members included local doctors, Henry Benson and William Stanton, and a pioneer motorist from Lincoln – Charles Henry Gilbert.  In 1895 Mr Gilbert actively campaigned against the law which limited the speed of motor cars to four miles per hour, and required a man to walk in front of them with a red flag.  That Act was abolished on 14th November 1896.

On Christmas Day 1899, Charles Gilbert was driver of the first motorised mail delivery service in Lincolnshire.  The Postmaster at Lincoln was keen to ensure that families of soldiers serving in South Africa in the Boer War would receive their letters, even though there were no trains to transport them that day.  Mr Gilbert and assistant Postmaster Mr Taylor drove from Lincoln in a Daimler motor wagonette with half a ton of mail, delivering bags to places around Woodhall Spa, Tattershall and Coningsby.  People gathered to cheer their arrival!  After driving 34 miles at an average of ten miles per hour, they reached the village of New York, where the local Postmaster invited them to share his Christmas dinner.

They arrived back in Lincoln at 6.45pm and Mr Taylor wrote to a full report of the trip, stating there had been no mechanical problems.  Considering they were driving on rough roads, and in darkness some of the time, it was a remarkable achievement.

The photograph showing them setting off from Lincoln, was added to website Flikr.com by a descendant of one of the postal workers.

We should like to wish everyone a peaceful and enjoyable Christmas